What is a binational couple?

When two people with different nationalities are in a relationship, this is considered a binational couple.

Binational marriages are no longer rare occurrences based on decisions made by individuals. Economic, political and societal developments mean that such marriages are now commonplace. Binational relationships and families are important part of modern society, and their number will continue to rise with tide of globalisation. These transnational relationships are behind a quiet demographic shift in our society. They also make a significant contribution to the integration of individuals and help to move societies towards a state of true multiculturalism.

How many binational couples are there in Switzerland? 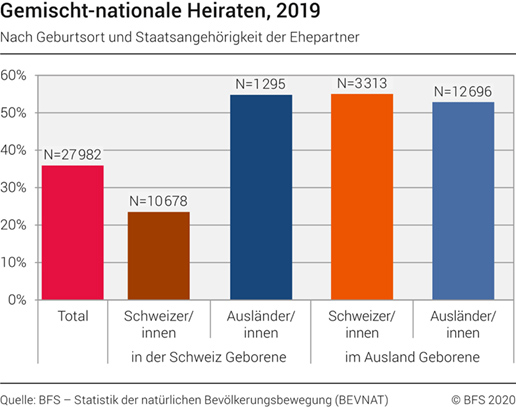 Marriages concluded abroad, unmarried couples living together, and civil partnerships are not included in the above statistic.

More information on the statistics can be found here:

How do binational couples differ to other couples?

A binational couple often must overcome numerous legal, social, cultural and financial hurdles that other couples are not faced with. If they manage to do so, a binational relationship can be even more fulfilling. Below is list of some of the characteristics of binational couples:

General framework
Binational couples often must start thinking about marriage, or civil partnership, very early on in their relationship because cohabitation between unmarried couples in Switzerland is not possible for many people (excluding EU citizens). In other words, many couples do not have the time to fully get to know one another, to completely understand the social and cultural background of their partner or to properly settle in Switzerland.

Relationship
Binational couples are not fundamentally different to couples where both partners have the same cultural background. In both cases, each person is unique, regardless of their nationality. Every person is socialised in a particular social, historical and cultural context and the values which prevail in each case are decisive for the development of every individual. However, the difference between these contexts, and the associated values, is often greater in binational couples than in non-binational couples. At the beginning of their relationship, binational couples do not have a shared cultural background, they have fewer common points of reference for cultural standards and values, and they often do not share a language that they can both speak to the same level. In addition to the usual topics of discussion in a relationship, binational couples often have extra problems to deal with. This can be both a challenge and a valuable learning experience.

Environment/Integration
A binational relationship means, for the most part, that one partner must leave their homeland, their family, and the cultural environment they're familiar with. One individual must find their feet in a foreign country, adjust to new everyday structures and create a network of friends and acquaintances from scratch. Integration in a new country depends on many factors, not all of which the couple can influence. E.g., it might be difficult for the foreign national to find work that corresponds to their professional qualifications. This can often lead to financial difficulties, putting further strain on the couple. For a successful binational relationship, both partners must rethink the values and standards that they're used to and, in time, find a new binational identity as a couple. Family members and friends don't always fully understand this, and extra effort is sometimes required for them to accept the relationship.

Language
Binational couples often communicate in a language that one of the two does not fully master. Accordingly, it can be difficult for the couple to precisely explain their emotions to one another. When one person speaks in their native language, an imbalance is produced which can negatively impact on the couple's communication. Misunderstandings which arise from linguistic difficulties are not always recognised as such. Living in a multilingual family, however, offers the members a chance to learn another language in an everyday context. Children can grow up speaking more than one language which is, in the context of the today's globalization, an invaluable advantage.

Religion
Religion shapes not only societies, but also legal systems. Religion is responsible in part for the values and standards on which our lives are based. This also applies to people who are not religious. With open-mindedness and tolerance, there's space for multiple religions within a family, or couple. It is important that partners approach each other's religion in an inquisitive and open manner and that they find out what level of influence their partner's religion will have on their everyday life and the relationship. If a binational couple, or a couple where the partners follow different faiths, are thinking about having children, the aspect of religion should be considered early on.

Hit enter to search or ESC to close